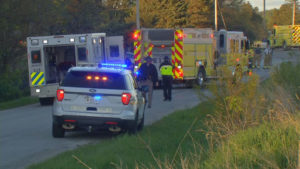 Crash scene near Solon where a motorcyclist died.

A motorcyclist was killed in a crash with a pickup in eastern Iowa Tuesday night.

The crash happened around 6:20 p.m. on Sutliff Road on the north side of Solon. The Iowa State Patrol reports a truck, driven by 54-year-old Glen Erenberger of Solon, turned left into the path of the oncoming motorcycle.

The motorcyclist, 22-year-old Quinn Houlahan of Solon, was killed in the crash – which remains under investigation.