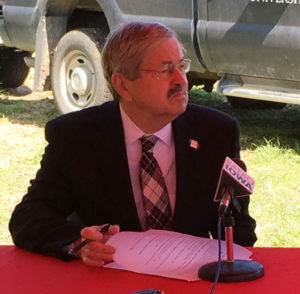 Branstad is likely to resign this month to become U.S. Ambassador to China. Attorney General Tom Miller says Lieutenant Governor Kim Reynolds will get the title of governor, but Miller argues she does not have the authority to name a new lieutenant governor.

“It’s going to be her decision, but I think the attorney general is absolutely wrong,” Branstad said during an interview this morning.

According to Branstad, the state’s constitution and a 2009 state law make it clear Reynolds can select a replacement when she becomes governor.

“The attorney general agreed with that in December and now for political reasons he’s decided to create a confusing situation that didn’t and doesn’t have to exist,” Branstad said. “I think it’s the worst kind of politics and I think he was talked into this by his partisan staff and that’s too bad and it really is a disservice to the people of Iowa.”

The attorney general issued an informal advisory in December, saying Reynolds would be able to name a new lieutenant governor when she becomes governor. Miller on Monday said after studying legal precedent and the constitution for a few months with staff, he’d changed his mind. Branstad says there’s “no question” Miller’s reasoning is contradicted by situations in the past decade in other states.

Branstad noted the state law that indicates Reynolds has the power to pick a new lieutenant governor passed the legislature when Democrats held majority control of the House and Senate — and Democratic Governor Chet Culver signed it into law.

“I think it’s pretty clear,” Brnastad said. “I think the attorney general is just wrong and I’m really disappointed that he would play this kind of politics.”

Branstad made his comments during an interview on a farm near Madrid. Branstad was there to mark “Soil and Water Conservation Week” and view conservation measures on the farm that are preventing soil and farm chemical run-off.