You are here: Home / Business / Entrepreneurs gather in Iowa City for EntreFest 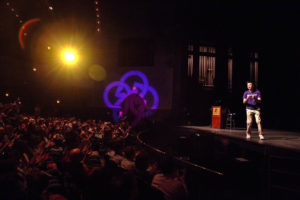 An event billed as the state’s largest gathering of entrepreneurs opened this morning in eastern Iowa.
EntreFest will run through tomorrow at various venues in downtown Iowa City.

“I think (there is) the ability for connections to be made, whether they are potential business partners, or whether it’s a company that comes across a startup with a product that would be a great fit for them,” Wilkins said. EntreFest launched in 2008 and was managed for several years by the University of Northern Iowa’s Center for Business Growth and Innovation. After a one-year hiatus, the event has returned.

“Rethinking how something has been done and maybe how you can do it in a better way, a more creative way, I think is really exciting and really energizing,” Wilkins said. More than 700 people are expected at this year’s EntreFest. They will hear from a number of successful, nationally known startup business founders. The Cedar Rapids Metro Economic Alliance is a co-producer of EntreFest.