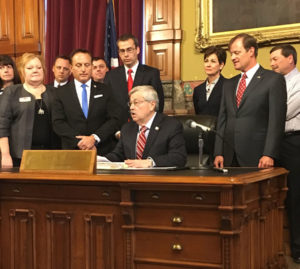 Governor Terry Branstad has approved a Republican plan to shorten the voting period in Iowa and set up new verification procedures for voters.

Secretary of State Paul Pate joined Branstad and Lieutenant Governor Kim Reynolds as the governor signed the bill into law this morning in front of a crowd.

“Could I see your ID?” Pate quipped.

Amid laughter, including his own, Branstad responded: “Don’t worry.”

Reynolds interjected, asking Pate: “If not, you’ll provide one for him, right?…Free of charge.”

Pate answered: “We’ll mail it to China for you.”

Branstad then told Pate he had his ID with him today.

“I had to use it to get into the Senate Office Building for the hearing the other day,” Branstad said.

Branstad was in Washington Tuesday for a hearing before the senate committee considering his nomination to be U.S. ambassador to China.

The new Iowa law Branstad signed today will shorten the “early” voting window in Iowa from 40 days down to 29. In addition, precinct workers will be required to check a prospective voter’s ID to confirm the person is eligible to vote. After the bill-signing ceremony, Pate told reporters 95 percent of Iowans have a driver’s license, military I-D or passport that can be used to verify they may vote.

“The real work begins now because we have to spend a lot of time educating,” Pate said, “make sure the public te public is away of what the real facts are now and make sure that everybody who, perhaps, doesn’t have that voter ID card, if you will, will have one. We’ll get that moving right away.”

Pate’s office plans to issue voter ID cards to the estimated 85,000 Iowans who do not have one of the other three forms of identification that may be used to vote. Pate plans to mail the new voter ID cards in bright orange envelopes.

The party primaries in June of 2018 will be the first election in which the new voter ID requirements will be in effect. Some precinct workers will be able to swipe a voter’s license to verify their identity.

“I’m just really excited about a chance to go to the next level on the technology side,” Pate told reporters. “Those e-poll books are going to be one of the greatest things. We’ll be talking about that for the next 10 years on how much better the system works and information will be available so much quicker and the integrity will be there.”

Democrats say the law is designed to make it harder for elderly, disabled and minority Iowans to vote. The head of the American Civil Liberties Union of Iowa issued a statement this morning, saying his group may sue to block implementation of the law.

State and federal courts have blocked or weakened voter ID laws in other states, ruling that concerns about voter fraud weren’t enough to justify the impact voter ID laws have on minority voters. Republicans in Iowa, like Pate, say the new voter ID cards the State of Iowa plans to issue, free-of-charge, to voters who do not have a photo ID address those concerns.