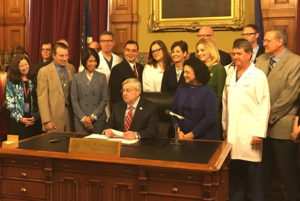 Supporters of the medical malpractice law join the governor for the signing.

Governor Terry Branstad has approved what he calls “very significant” changes to some of the rules for medical malpractice lawsuits.

A large crowd gathered around the desk in Branstad’s formal capitol office as he signed the bill into law.

“This is something I’ve waited a long, long time to sign,” Branstad said, as a woman in the crowd responded: “Us, too,” and people started laughing.

Branstad continued: “I’ve been on record for this for many, many years.”

The new state law sets a $250,000 limit on “non-economic damages” for emotional pain and suffering that are awarded when health care providers are found liable for medical negligence. However, that “cap” or limit will not apply if a patient dies, loses major bodily functions or is substantially disfigured. Branstad said compared to neighboring states, medical liability lawsuits in Iowa take longer to resolve and cost more to defend.

“This bill’s going to make it easier for us to attract and retain doctors,” Branstad said. “I know what it’s done in the state of Texas. I’ve talked with Governor Perry about what malpractice reform did there and we’ve seen what’s happened in other states.”

The bill also strengthens the standards for “expert witnesses” called to testify in medical malpractices cases.

Branstad signed a handful of bills into law today. The governor has until May 22 to sign or veto all the bills that cleared the 2017 legislature. Branstad told reporters today that he hopes to complete his review and take final action on the five dozen remaining bills by the end of next week.