You are here: Home / News / Klobuchar: Democrats ‘can’t forget the middle of the country’ (AUDIO) 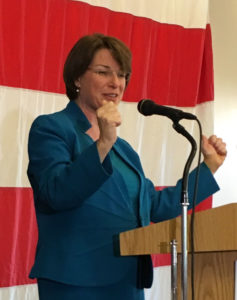 More than 250 Democrats in Iowa’s largest county gathered tonight, commiserating about recent losses, but urging one another to “lean forward” to 2018 and beyond.

Minnesota Senator Amy Klobuchar was the event’s keynote speaker. She told Radio Iowa heading in that Democrats “can’t forget the middle of the country.”

Klobuchar spoke for about 40 minutes at the Polk County Democrats Spring Fundraiser, briefly tweaking President Trump for being more focused on “tweetership” than leadership. She described the U.S. Senate as “a place of compromise” than can provide an “emergency brake” to some of Trump’s agenda.

“I had to make a decision at the end of last year and Trump had won and I had an opportunity to run for governor and you know what I decided?” Klobuchar asked the crowd. “I decided I wasn’t going to leave my duty station because the United States Senate is the place to be.”

But Klobuchar spent most of her time laying out a “four corners…competitiveness agenda” — something she might use as the foundation for a 2020 presidential campaign.

Klobuchar stood to speak in front of the huge American flag that was used on Election Night 2012 in Des Moines at President Obama’s final campaign rally.

“We wanted it to be here tonight to show that we’ve had good days in the past. We have a good day today and we’re going to have good days in the future,” Polk County Democratic Party chairman Sean Bagniewski said.

Senate Democratic Leader Rob Hogg of Cedar Rapids told his fellow Democrats to quit moping around and complaining about one another on social media. Hogg urged Democrats to have a “summer of citizenship in 2017” and as his cadence escalated, Hoog seemed to be losing his voice.

“The pledge I am making to the Iowa Democratic Party and to every Democrat in the state: I am going to educate my members,” Homan said. “…They are going to know who the hell did this to ’em and it wasn’t Democrats.”

Klobuchar, who took the stage a few minutes later, praised other speakers and the crowd for exhibiting “incredible energy.”

“As I’ve told many of you before: ‘I can see Iowa from my porch,'” Klobuchar said, a turn on Sarah Palin’s remark that you can Russia from land in Alaska, and last night’s Des Moines crowd laughed. “It is good to be back with friends and I thought I was going to come down here to cheer you guys up, but you’ve cheered me up.”