You are here: Home / News / Corbett book tour may lead to launch of gubernatorial campaign 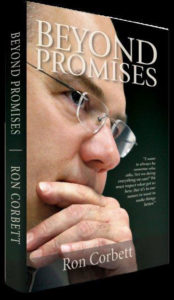 Cedar Rapids Mayor Ron Corbett is launching a book tour today and Corbett said feedback from his travels will determine whether he launches a campaign for governor.

“I’m actually going to use the book as a little bit of an introductory of Ron Corbett to the people of Iowa,” Corbett said during an interview with Radio Iowa.

The title of the book is “Beyond Promises” and it includes details about Corbett’s election in 1986 to the Iowa House when he was 26 and his rise to become the youngest-ever speaker of the House eight years later, when he was 34 years old. It also features his work over the past seven years on flood recovery in his adopted hometown of Cedar Rapids.

“It really is an amazing story of our community suffering the worst natural disaster of the state’s history to recovering and being a bright, growing city,” Corbett said.

Corbett’s book tour will last 30-to-45 days. Corbett said if he gets the “right feedback” from voters, he’ll “take the next step” and run against soon-to-be Governor Kim Reynolds in a Republican primary in 2018. Governor Terry Branstad just this morning sent out a fundraising letter for his successor, arguing “not a single person who even comes close” to Reynolds when it comes to being qualified and ready for the top job. According to Corbett, a primary would be a healthy exercise for the GOP.

“Remember, a couple of years ago Joni Ernst had a competitive primary and she won that and that primary was like a slingshot for her,” Corbett told Radio Iowa. “And on the Democratic side…Bruce Braley came out of that primary season with no competition and he was flat-footed.”

Corbett said if he does decide to run, he’ll focus on issues like Iowa’s “outdated” income tax system and the state’s “slipping” education system as well as the “lack of progress on water quality.”

Corbett’s first book-signing event is starting at 10:30 a.m. at the Cedar Rapids Public Library. He’ll be at the public library in downtown Des Moines at 3:30 p.m. Corbett will be giving copies of “Beyond Promises” to those who attend. A former Cedar Rapids TV anchor who’s now a Republican state representative will be on stage with Corbett to interview him in front of the crowd.