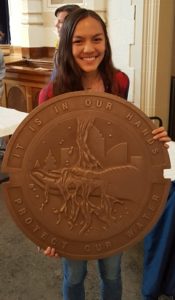 Artwork submitted by a high school sophomore will soon adorn hundreds of manhole covers on streets throughout Iowa’s largest city.

The City of Des Moines sponsored a contest designed to bring awareness to runoff pollution and selected a submission from Ellie Duong. “My design has a hand in it, with water running through (the hand) over a background of the (Des Moines) city skyline,” Duong explained. “I wanted to have the hand be kind of like a filter for the water, representing us holding back all the bad stuff…so what would come out from underneath the hand would be cleaner and better water.”

The 3D artwork will be featured on roughly 300 manhole covers in Des Moines neighborhoods. Des Moines Public Works Director, Jonathan Gano, says the city reframed its entire campaign based on Ellie’s design. “We wanted to come up with something that was a permanent and durable reminder that these new storm sewers are draining directly to the river. So, in a way, their water quality downstream is quite literally in the hands of the property owners and residents in these neighborhoods,” Gano said.

Duong, who attends Roosevelt High School in Des Moines, was presented with a check for $250 and full-size replica of her work at a ceremony at her school last week.