You are here: Home / Crime / Courts / Fallen Pottawattamie County deputy remembered for the things he did as a dad 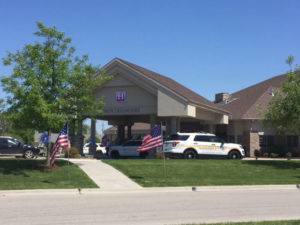 Hundreds of officers turned out for Deputy Mark Burbridge’s funeral.

The funeral for a Pottawattamie County Sheriff’s Deputy killed in the line of duty was held this morning. Mark Burbridge was 43.

His son, Kaleb, said his father pointed him in a positive direction in life. “You’re a man I can be proud of being my dad,” Kaleb said. “I’ll always have stories of you that ended with a ‘don’t tell Jessica’ or ‘don’t tell your mom.’ I can always thank you for setting me on the right path in life and always teaching me to ‘just roll with it.'”

Kaleb said his father gave him a “sense of respect” and taught him many skills. “I want you to know just how much you mean to me. I love you more than anything in the world and I’m going to miss you until the day I die,” Kaleb said.

A little levity was added, as Kaleb thanked his father for taking him to Hooters for his tenth birthday. Burbridge’s daughter Karley also shared some thoughts on her father.

“I was a huge daddy’s girl growing up, as well as a little tom boy,” Karley said. “We shot guns and bows, he took me camping and four-wheeling, and we played video games together like Guitar Hero and Call of Duty Ghosts.” While her father was a hero to the community, Karley said he was also her personal hero.

“Because he protected me from the monsters under the bed to the ones who walked the streets,” Karley said. “Not only did he protect me, but he also had the exhausting and expensive job of raising me to be a decent person. He taught me how to be caring, independent, and strong. He was a great cop, but an amazing dad.”

Burbridge was shot and killed last Monday by an inmate who escaped the jail in Council Bluffs before being captured in Omaha. Burbridge was a 12-year veteran of the sheriff’s department.