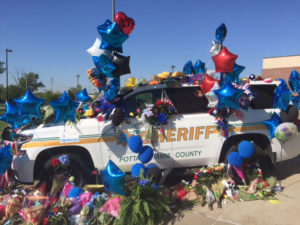 The memorial to Deputy Mark Burbridge at the Pottatwattmie County Sheriff’s office.

Law officers from around the state will gather in southwest Iowa today to honor a fallen colleague.

A memorial service for Pottawattamie County Deputy Mark Burbridge is today at 10:00 A.M. The service will take place at the Mid-America Center in Council Bluffs and is open to the public.

The Pottawattamie County Sheriff says the 43-year-old Burbridge, was one of two deputies shot by 23-year-old Wesley Correa-Carmenaty as he escaped the jail last Monday. Deputy Pat Morgan was also shot, and is expected to recover. Burbridge was a 12-year veteran of the department.

Correa-Carmenaty is expected to be brought back to Iowa today from Omaha, Nebraska, where he was caught after the shooting.