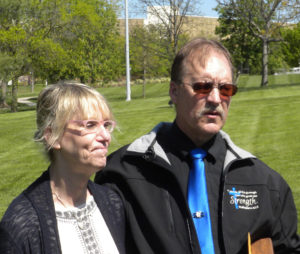 The annual Police Officer Memorial Ceremony held Friday was one of mixed emotions for one the families who saw their son honored.

Urbandale officer Justin Martin’s name was added to the memorial with three other officers who were killed in the line of duty.

Martin was ambushed and shot to death on November 2nd while on patrol. His mother Jayne Martin says the ceremony honoring her son and the other officers was heartwarming, but she also felt sadness as she continues to deal with his death.

“The second (of May) was the six-month mark and that was kind of hard. I celebrated a birthday without him. I try to go on walks in the walk park where he loved to play and just be alone and thank God for taking care of him,” Martin says.

Justin’s father Randy says the ceremony brings a lot of emotions back up as they work through the grieving process. “Some of the friends that we have up north who have lost their children have told us that we are not living in a whole different norm,” Martin says. “And you take sometimes one minute at a time — sometimes one hour at a time — it is very difficult. We miss him, but we can’t change the facts though.”

The Martins are from Rockwell City and he says the community support all around has been a big help in dealing with the loss. “It’s unbelievable what Urbandale’s done, even the Des Moines metro, and then when we go back up home to Rockwell City the surrounding communities, schools, everybody is around us — and that really helps,” he says. “Our students, they’re doing an honor challenge on May 10th. It’s a workout from Crossfit that Justin loved to do. All the students in our school k-through12 are going to be doing that. It is a great honor that we have that kind of support as well as the support of Urbandale as well. We couldn’t ask for more.”

The City of Urbandale named a reading room at the public library after Justin. “I looked on Facebook the other day, and there were two chairs in Justin’s room in the library for us, you know they were there for us,” Jayne Martin says. “It was just so heartwarming to feel, the emotions went through, but it was like oh my goodness.”

Mrs. Martin says the memorial ceremony brought some of those same feelings. The ceremony features honor guards of officers from around the state in full dress uniforms, and she says it is something her son would have loved.

“Yes, whether it was Boy Scouts or being a policeman or whatever he did, he did it for,” she paused and her husband said “Something bigger than himself,” and she said “Yes.” Justin Martin was just 24 years old when he died. Des Moines officer Anthony Bemino was shot to death a short time later by the same man accused of killing Martin.