You are here: Home / Sports / Stenhouse holds on for first Cup victory

McMurray started the overtime laps running fifth but made a bold move on the backstretch on the last lap, splitting Jimmie Johnson and Kyle Busch to move into second. Stenhouse did not give him or Busch enough room for a finish-line pass.   McMurray finished inches ahead of Busch, his best finish of the year. 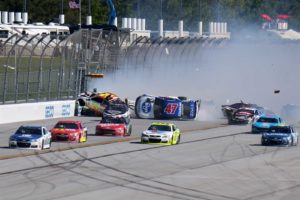 McMurray (who is following Dale Earnhardt Jr., as the big  crash develops behind them) and the other contenders at the finish avoided the only major crash of the day, on the 169th lap that damaged or eliminated eighteen cars and caused the race to be red-flagged for almost half an hour.

Stenhouse started the race from the pole with a qualifying lap at 191.547 mph.  McMurray started 23rd in the 40-car field but was running in the top ten before the race was one-third finished.

The race was extended by three laps beyond the 188 laps scheduled on the 2.66-mile speedway, NASCAR’s longest and fastest oval where McMurray has won twice. He also won the fall race in 2009.

Stenhouse’ victory ends a 101-race drought for car owner Jack Roush.  The last victory for Roush Fenway Racing was provided by Columbia’s Carl Edwards on the road course at Sonoma in June, 2014.

NASCAR will race at the Kansas Speedway next Saturday night.