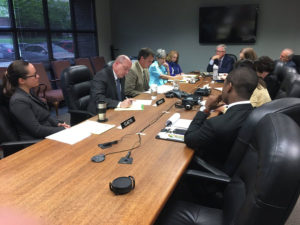 The Board of Regents discuss a proposed tuition increase.

Student leaders criticized lawmakers and the governor as the Board of Regents held the first reading of a proposed tuition increase this morning in a telephone meeting.

The proposal tacks on a $216 increase for undergraduate students on top of the two percent increase approved in December for a total of $358. Iowa State University student body president, Cody West, says those at the state capitol have forgotten that ISU is a “proud land grant university.”

“As a collective body we must make a persistent effort to change the status quo that has developed at the statehouse. Together we can set the state of Iowa apart as a state that values a quality education for all, at a price that makes sense,” West says. University of Iowa student body president Jacob Simpson says the lack of state support has impacted the school in many areas.

“The reality of the situation is that the University of Iowa lacks the revenue necessary to continue providing the world-class it has offered the students for over 170 years,” Simpson says. “Rankings are falling, faculty are leaving, strategic initiatives are going left unfunded. The Iowa Legislature decided to place our university in this position as they cut appropriations by $9.2 million mid-year and by 6.4 million this coming fiscal year.” The U-I proposal includes increasing tuition for students who aren’t residents of the state by 6.8 percent. Simpson says he is concerned about the “magnitude of the burden being placed on nonresident students.”

“If you value diversity for its contributions to our community and to learning — you cannot continue punishing nonresidents at the University of Iowa for the sake of maintaining relatively equal resident tuition at the University of Northern Iowa and Iowa State University,” Simpson says. The nonresident tuition increase at the U-I would be $1,784. Others also spoke out about the increase. University of Northern Iowa president Mark Nook says the increase in tuition will not cover all of their increases in operating costs.

“We will still be looking for ways to provide a high-quality education and meet our budget with the reduction in our total resource,” Nook says. “It is a difficult challenge for us because of our commitment to our students in making sure that they have an affordable education.” U-I president Bruce Harreld says his school will rank lower in cost than other institutions even with the increase. He says the budget problems the state schools are having started several years ago as the state started cutting its support to the schools.

“While in 39 states total funding for students has increased, Iowa’s has in fact decreased,” Harreld says. “The result has been problematic here on campus with 22 faculty resignations last year, 96 this year and declining rankings,” Harreld says. The Board of Regents will vote on the tuition increase at its meeting in June.

Photo courtesy of the Board or Regents.