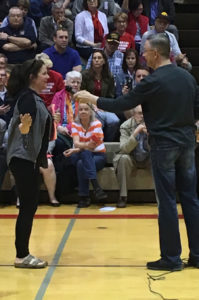 Last night, Republican Congressman Rod Blum walked into the high school gym in Dubuque where he and his son played basketball. He was confronted by a loud crowd of constituents, most of whom side with the opposing political team.

Blum acknowledged the partisan divide at the end of his town hall event, saying “most of” the thousand or so people sitting in the bleachers probably didn’t like “a single thing” he had said.

“I respect all of you too much to lie to you. I tell you the way I see it and, secondly, I hope you know that every vote I make is about my district and trying to help people here, trying to help get the economy going, trying to help raise people’s wages,” Blum said, to boos and a few cheers.

This was the first of four town hall-style meetings Blum has scheduled this week in his district. Blum’s recent vote for the American Health Care Act was a flash point last night.

“You voted on this bill in a rush. There were no committee hearings. It pertains to my life,” one woman said to Blum. “What was the rush?”

People packed a gym for a town hall meeting with Congressman Rod Blum.

Blum said the process had been “bad,” but congress had to do “something” because many Americans who’ve gotten insurance through the ObamaCare marketplace won’t be able to buy it next year.

“The bill is better than what we have, so it’s heading in the right direction,” Blum said, to a chorus of boos and some shouts of “no.”

People in the crowd were given tickets with numbers. Tickets were drawn, so those who got to ask questions were chosen in a lottery. although one woman yelled: “Bingo!” when Blum called out her ticket number. The gym erupted like someone sank the winning basket when one questioner challenged Blum to refuse campaign donations from a pair of Oklahoma billionaires.

“Would you take a vow not to ever take any more money from the Koch brothers?” the woman said, to cheers.

Blum told the crowd his town hall meetings are official congressional events and he couldn’t answer political questions. Before the event started, Blum was questioned by a KCRG TV reporter and Blum walked out of the interview when asked why people had to show a photo ID and prove they live in the district to attend his town hall meetings. Dallas Knapp, a Loras College senior who was the last person called upon last night in the Dubuque Senior High gym, asked Blum why he had “stormed away” from the interview.

Blum said he’d been told the television interview would be about Dubuque’s “Dream Center” which serves “underprivileged kids,” where the interview was staged.

“We were ambushed. He didn’t want to do anything on the Dream Center and very apparent that he had an agenda and so, you know, it’s my right to say: ‘This interview is over, quite frankly, and that interview was over,'” Blum said. “Now you say: Why haven’t I held town halls? Well, I could do what some people around the country are doing, Republicans. They hold ‘pop-up’ town halls so nobody knows where they’re at. They hold coffee town halls so there’s five people there…so, taking the tough questions? I took a lot of tough questions tonight I think.”