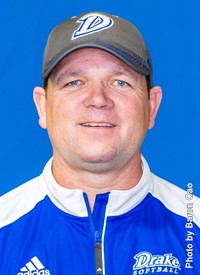 The Drake softball team is playing its best at the right time as the Bulldogs get set to travel to Normal, Illinois for the Missouri Valley Tournament. The Bulldogs struggled following a season ending elbow injury to Valley pitcher of the year Nicole Newman in February and opened conference play 3-14.

A three game sweep at Bradley triggered a turnaround as the Bulldogs won eight of their last nine games.

“Right when we got to Bradley we sat down in a hotel and said ‘Hey, our backs are against the wall and this is what we need to do to get where we want to get to at the end of the season'”, said Drake coach Rich Calvert. “We have turned it around.”

The Bulldogs are 28-26 overall and the sixth seed in the Valley Tournament. They open Thursday against seventh seeded Missouri State.

“We are playing with a lot of good confidence right now”, added Calvert. “We are playing good defense, getting some timely hitting and some really good pitching from Kailee Smith.”

Smith tossed a perfect game in Drake’s 8-0 win over Loyola to close the regular season.