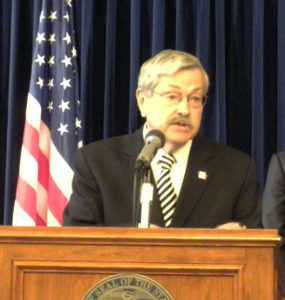 “There’s an election coming up in 2018,” Branstad said this morning. “…I think it’s time for a new attorney general.”

Branstad’s been criticizing Attorney General Tom Miller for issuing an opinion last week that concluded Lieutenant Governor Kim Reynolds doesn’t have the authority to name a new lieutenant governor when she replaces Branstad as governor. During an appearance at the Westside Conservative Club in Urbandale this morning, someone asked Branstad why he didn’t just fire Miller.

“We can’t fire the attorney general. He’s openly elected. You can!” Branstad shouted as the crowd laughed and applauded. “…Let’s get a new attorney that will represent Iowa and hte people of Iowa’s interests and just follow the law.”

Branstad, who has won six terms as Iowa’s governor, also mentioned Miller’s longevity in office as he urged fellow Republicans to defeat Miller’s expected bid for a 10th term in 2018.

“He has been the attorney general since 1978, with the exception of four years of Bonnie Campbell,” Branstad said.

Campbell is the Democrat who served as Iowa’s attorney general from 1991 to 1995.

Last week, Iowa’s current attorney general said Reynolds would have the title of governor when Branstad resigns to become U.S. ambassador to China, but Miller argues his read of the state constitution indicates Reynolds will have the duties of both governor and lieutenant governor when Branstad leaves, so she can’t name a new lieutenant. Branstad called that “convoluted” reasoning, since the constitution forbids the governor from holding another elected office.

Miller told The Cedar Rapids Gazette today that “despite all the rhetroic” his “thoroughly researched opinion is based on the law and not politics.” Miller said Iowa’s constitution should be amended to give a lieutenant governor constitutional authority to name a replacement when a governor cannot serve his or her full term.