You are here: Home / News / Millions of dollars to go into makeover for Arnolds Park 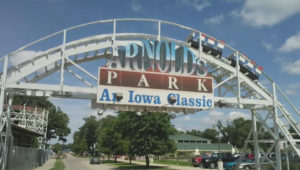 The entrance to Arnolds Park.

A 128-year-old amusement park in northwest Iowa is getting a $12 million makeover.

The Board of Directors of Historic Arnolds Park unveiled the “Restore the Park” project Tuesday. Board president Jill Harms says an anonymous group of donors has pledged a matching grant of up to half of the project’s cost.

“We launched a campaign in 1999, called ‘Save the Park,’ to save it from being developed into condominiums. In 2003, it was ‘Sustain the Park,” to help the park operate profitably. A few years after that, we immediately started having visions that we really need to restore the park to what it once was,” Harms said. 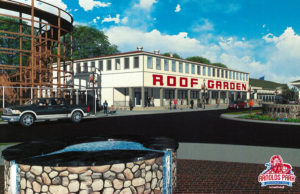 A look at the proposed renovation of Arnold’s Park.

A fund raising group has already secured about $2 million of the $6 million matching funds. The improvements call for remodeling the interior of the park’s Roof Garden, while the exterior will stay the same as it has looked since the 1930s.

“The pavilion, which has the wooden floor from the original roller rink, is going to be expanded so we can hold close to 500 people now instead of 300,” Harms said. “We’ll have a full commercial kitchen, so we’ll have many more catering opportunities in both of those facilities.”

Arnold’s Park is home to the world’s 13th oldest wooden roller coaster, The Legend, which has seen millions-of-dollars worth of restoration in recent years. The coaster carried its first riders back in 1927.

(Thanks to Ryan Long, KICD, Spencer)