You are here: Home / News / Grassley calls on FBI to reveal whether it’s investigating Trump 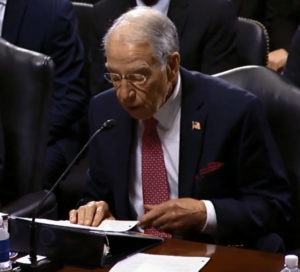 Republican Senator Chuck Grassley this morning said it’s time for the FBI to publicly reveal “whether it is or is not investigating the president.”

“Because it has failed to make this clear, speculation has run rampant,” Grassley said.

Just-fired FBI director James Comey did say during a congressional hearing in March that his agency was investigating whether anyone associated with Trump’s 2016 presidential campaign was involved in Russia’s election meddling. President Trump’s written statement about Comey’s firing indicated Comey had told Trump three times that he was not under investigation, but several news outlets are citing sources within the FBI who dispute that.

“Wild speculation that the FBI is targeting the president in a criminal or intelligence inquiry is not just irresponsible and unfounded, it provides aid and comfort to the Russians and their goal of undermining faith in our democracy,” Grassley said.

Grassley addressed the issue in a statement this morning during a Senate Judiciary Committee meeting.

“The American people deserve to know if senior government officials are under active criminal or intelligence investigation,” Grassley said.

Grassley said during a FOX News Channel interview yesterday that those who suggest Comey’s firing is “Nixonian” need to “suck it up and move on.”