You are here: Home / News / State Representative Greg Forristall has died of cancer 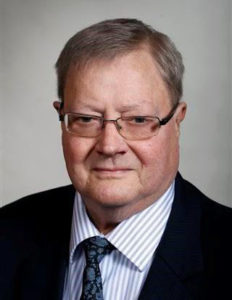 A western Iowa legislator has died.

State Representative Greg Forristall, a farmer from Macedonia, has died of cancer. Forristall was first elected to the Iowa House in 2006. Forristall’s health declined precipitously in the past several months and he was unable to participate in many legislative activities.

Fellow Republican Linda Upmeyer, the speaker of the House, released a written statement late this morning, calling Forristall a “dedicated public servant” and “an advocate for the arts and education.” Foristall’s wife, Carol, is a retired music teacher. She served as his clerk in the House.

Funeral arrangements are pending. Forristall, who was 67, grew up on his family farm near Macedonia. He graduated from the University of Iowa in 1972 and then earned a master of arts degree in 1973 from UI.

Forristall’s current term in the Iowa House ran through January of 2019. Iowa’s governor will set the date for a special election in the district for a replacement.