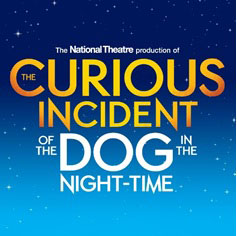 The show that won the 2015 Tony Award for Best Play is making one stop in Iowa on its national tour.

Based on the best-selling book, “The Curious Incident of the Dog in the Night-Time” opens tomorrow  night (Tuesday)  in Des Moines. It features actor Gene Gillette as the father of a boy who’s exceptionally intelligent but ill-equipped to interpret everyday life.

“‘Curious Incident’ is the story of this extraordinary young man named Christopher Boone who finds out that his neighbor’s dog, his best friend in the world, has been murdered,” Gillette says. “He sets about on this detective journey to find out who killed his best friend and along the way, he uncovers all of these secrets.” The 15-year old falls under suspicion for killing the dog and his own investigation of the incident leads to life-changing discoveries.

“It’s a really beautiful story about family and about valuing the differences in other people,” Gillette says, “and it’s all integrated with this amazing set and projections and lights and sounds, this really immersive piece of theater that’s going to blow you out of your seat.” The 2003 book authored by Mark Haddon won numerous literary awards in the U.S., Japan, Holland and Italy, as well as Book of the Year in the UK, and it’s been translated into 44 languages. Given some of the topics in the play, Gillette suggests it’s a great show to take a kid to see, age 12 and up.