You are here: Home / News / Branstad packing for ‘slow boat to China’ 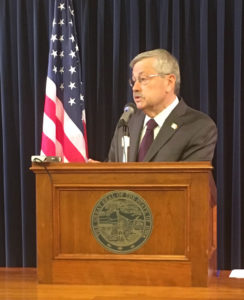 Terry Branstad is still Iowa’s governor, but the U.S. senate is poised this week to confirm his nomination to be U.S. ambassador to China. Branstad told Radio Iowa he’s not superstitious and packing for the trip is well underway.

“I’m not official until I’m confirmed,” Branstad said last week. “I feel good. I feel confident that it’s going to happen, but it’s been a long and arduous process and then, obviously, packing is a big deal and we’re moving a long way.”

Several weeks ago Branstad’s staff moved the governor’s political memorabilia out of glass display cases in the state capitol. None of that will go to China, but Branstad said what is going is being sorted into two piles.

“Some of it will be shipped ‘slow boat to China’ and some of it will go by air, but those that are going to boat container they tell me is going to take six weeks to two months,” Branstad said, with a laugh, “so we need to decide what we need right away and what we can do without for a while.”

There are four distinct seasons in Beijing and the Branstad’s will need clothes for what guidebooks describe as the “long, hot summer” ahead as well as a “chilly” winter. Unlike Iowa, there are sand storms in Beijing, typically during the spring month of April, but sometimes in May.

Branstad and his wife, Chris, will live in the U.S. Embassy in Beijing. Their daughter, Allison, her husband and two kids are going, too, and they plan to live in a guest house in the embassy compound. Allison Branstad Costa has been an elementary teacher in the Waukee School District and she’s been hired to teach in the International School of Beijing.