You are here: Home / News / Debate on whether to allow fireworks continues among city councils 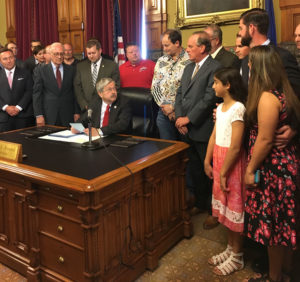 Supporters of the bill legalizing fireworks surround Governor Terry Branstad at the signing.

Some cities have already taken steps toward banning the use of fireworks, while others continue discussions as the June 1st date allowing the sale gets closer.

The Newton City Council held a lengthy discussion Monday, but held of a final decision with a special meeting on the issue scheduled Wednesday. Several Council members say they have safety concerns about fireworks, but do not support a full ban because of public support.

Third Ward Councilman Craig Trotter cited a Des Moines Register Iowa Poll that shows statewide support for fireworks, which he says found 65 percent of people statewide favor being able to use fireworks, and Trotter says the city’s unscientific poll found 63 percent of people in favor of using fireworks. Another councilmember pointed out the city’s online poll was flawed because it didn’t track if someone voted more than one.

At-large Council member Lin Chape reluctantly supports some use of fireworks. “If I had my way I would say ‘absolutely no fireworks within the city.’ But I have to represent my constituency, and that’s where I am coming from, ” Chape says.

Fourth Ward Councilman Steve Mullan supports a ban. “We’re putting up stops signs for safety’s sake all over our community. We pride ourselves on being a safe city,” Mullan says,” where do we stop with the word safe?”

Residents Randy Ervin amd Dennis Landgrebe spoke in favor of the fireworks. “Being a very big fan of pyrotechnics, I think it’s very important that not only do we sell and get the benefit from the sale of fireworks — but as Americans that we are able to set those fireworks off,” Ervin says. “The law is the law. Love it or hate it — give it a chance — that’s all I am asking,” Landgrebe says.

Under the new law, cities can ban the use of fireworks, but can’t ban their sale. The Newton City Council approved a plan to have the fire department do inspections businesses which want to sell fireworks.

The Johnson County Board of Supervisors passed a resolution last week to put a 90-day ban on the sale of fireworks in the unincorporated parts of the county. Johnson County Supervisor Mike Carberry says the county attorney approved the moratorium on sales, despite what the law says, as he says they want more time to analyze the sales aspect of the bill.

The Eldridge City Council discussed the issue Monday night, but didn’t make a final decision. Ames city officials are hosting a workshop tonight as they decide what to do. Cedar Falls will allow some fireworks. Sioux City fire officials don’t want the use of fireworks to be allowed in their city. No official draft ordinance is available yet, but the city council is expected to work on it this week and vote on it next Monday. Urbandale has passed the first reading of an ordinance to ban fireworks.
(Randy Van, KCOB, Newton contributed the Newton portion of this story)