You are here: Home / Crime / Courts / State Patrol stops driver doing 144 on I-80 near Stockton 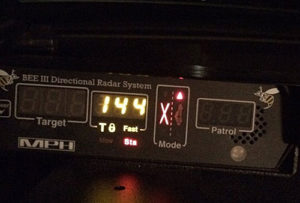 A motorist was clocked at more than double the posted speed limit on Interstate 80 in eastern Iowa last week.

The Iowa State Patrol, in a Facebook post today, said a trooper stopped a driver who was going 144 miles-an-hour on I-80 near Stockton in Muscatine County. The top speed limit on Iowa interstates is 70 miles-an-hour.

The post includes a photo of the radar reading and notes the traffic stop happened “during the midnight shift.” The post states, “A dark, open road is no excuse for high speed.”