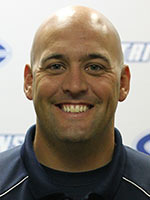 The Iowa Central baseball team is two victories away from a trip to the Division II Junior College World Series. The Tritons take a 36-16 record to Southeast Community College of Nebraska this weekend for the best-of-three North Plains District Tournament.

Iowa Central has won 10 straight games, including three straight to win the Region 11 Tournament in Waterloo this past weekend.

“We got off to a slow start but we talked all along about peaking at the end and playing our best baseball at the end”, said Iowa Central coach Justin Meyer. “That has been achieved.”

Sophomore Anderson DeLeon and freshman Max Steffens anchor a pitching staff that is limiting opponents to a .259 average. The duo combined for a 12-0 record in conference play.

Meyer says the Triton’s biggest advantage may be the schedule they play in the Iowa Community College Athletic Conference.

“Week in and week out it is the same intensity for us”, added Meyer. “This is just another weekend trip for us and hopefully that is an advantage.”

The teams will play a doubleheader Saturday in Beatrice, Nebraska. A third and deciding game, if needed, will be Sunday.