You are here: Home / Crime / Courts / Peace Officers Memorial Service remembers the 142 who died on duty 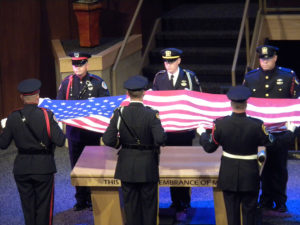 An honor guard unfolds the American flag at the service.

Services are being held across the state as part of National Peace Officers Memorial Week. Dozens of officers gathered at a service in Urbandale last night, where Chaplain Art McClanahan gave the opening prayer.

“Holy and gracious God, we gather tonight for the Peace Officers Memorial Service. Some years we show our concern and demonstrate our connection to other departments that have lost brother and sister officers,” McClanahan says. “This year is different loving God. Five among us are no longer among us.”

McClanahan continued, talking about the fallen officers from the area. 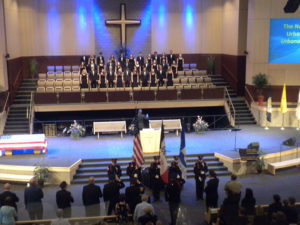 Officers from around the area attended the Peace Officers Memorial Service

“Three from Des Moines, Officer Susan Farrell, Officer Carlos Puente-Morales, Sergeant Tony Beminio. One from West Des Moines, officer Shawn Miller, and one from Urbandale, officer Justin Martin, made the ultimate sacrifice in the line of duty this last year,” McClanahan says. His prayer talked about the reason for the service.

“We come together here in this place compassionate God to reach out to each other, for strength, for comfort, to not be alone in our grief,” McClanahan says. Chief Joe Simon of the Polk County Sheriff’s Department talked about the sacrifices families have to make when someone becomes a law officer.

“There was no permission slip for our spouses, children or family members to sign. It was automatically thrust upon them,” Simon said. “Some of those sacrifices would be working different shifts and holidays and missing normal family events — such as kids sporting events, band concerts and dance recitals. It would mean missing family dinners, and special family reunions.” He told those at the ceremony they have everyone’s support. 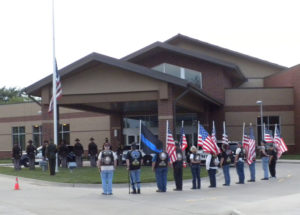 Members of the Patriot Guard stand watch at the entrance to the service.

“To the husbands, wives, parents, children, siblings, friends and fellow officers, all of those here tonight who have been touched by the lives we honor– you have been called upon to bear a special burden,” Simon said. “And, though there is no speech or ceremony that can ease your pain. No tribute or salute, tonight we join together in vigil to honor you courage. And to fill your hearts with our community’s gratitude and ultimate thanks.”

Simon wrapped up with this. “We read in scripture, greater love has no one than this that a man lay down his life for his friends. Let us remember these words today and always, and in our deepest gratitude let us be secure that our dear friends rest in peace in a place of honor,” Simon said.

A video showed the names of the 142 officers who were killed in the line of duty last year.  The service ended with a gun salute to the fallen officers and taps.