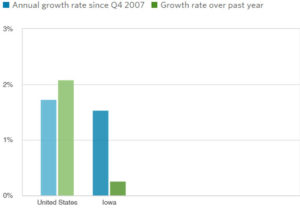 The Pew Charitable Trusts analysis concludes average personal income growth for Iowans has grown 1.5 percent a year since 2007, when the last recession began. That’s nearly the national average over the 9 year period.

However, in the last quarter of 2016, Iowans’ personal income rose an anemic three-tenths of a percent. That’s seven times below the national average.

Personal incomes fell in South Dakota during the last quarter of 2016, but rose in the other five states surrounding Iowa. The growth rates in Minnesota, Nebraska, Missouri, Illinois and Wisconsin were all higher than in Iowa.