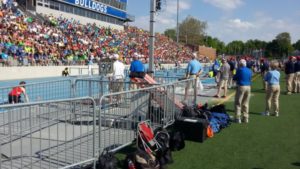 The State Track and Field Meet has featured the boys ands girls competing on the same weekend since 2005 and members of both governing bodies expect the combined meet to continue into the future.

Jared Chizek is with the Iowa High School Athletic Association and says the state meet has become one of the largest in the country and is near the top in the country in attendance for any track meet.

“This year we will have just shy of 5,300 athletes taking part in the championships”, said Chizek. “Last year we had record attendance of more than 38,000 fans.”

The combined meet began as a way to accommodate the renovation of Drake Stadium and happened despite the objection of the former Executive Secretary of the girls’ union E. Wayne Cooley.

“Dr. Cooley was a very staunch proponent against doing it because he had the fear that the girls would be compared to the boys”, said John Overton of the Iowa Girls High School Athletic Union. “But after we had it for two years he came to us and said ‘You guys keep this thing together. This is the greatest thing I have even seen.'”

The state meet begins Thursday morning with competition in class 1A and 4A.