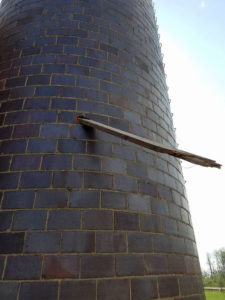 Wood in a silo after storms near Fort Atkinson Monday night.

After severe weather slammed wide sections of Iowa the past two days, forecasters say we’re likely in for a third day in a row of high winds, heavy rain and hail.

Meteorologist Craig Cogil, at the National Weather Service, says last night’s thunderstorms were accompanied by wind gusts up to 75 miles -an-hour, knocking out power to at least six-thousand homes.

“We saw storms produce quite a bit of widespread tree damage, especially in the Fort Dodge area,” Cogil says. “It continued on to the northeast, impacting locations in Mason City and Clear Lake, again, primarily tree damage last evening. A lot of big tree branches down in addition to some trees down.”

“We did see some pretty good rains in portions of west-central to northwest Iowa where there was one-to-two inches of rainfall,” Cogil says, “but no flooding.” The town of Carroll reported the state’s hot spot on Tuesday with 91 degrees, but this next weather system will be bringing much chillier air along behind it, as highs Friday may only be in the 50s and 60s.

“There will be a significant change after this system leaves later on tonight,” Cogil says. “Much cooler temperatures for tomorrow and Friday but really, the big thing we’re focusing on is the potential for severe weather for today.” Iowans are warned to keep a close eye on the sky and an ear to the radio, as today’s weather could get rough.

“Certainly, a good portion of central-into-eastern Iowa is looking at the potential for severe storms later this afternoon and into this evening,” Cogil says. “All modes of severe weather are possible, large hail, damaging winds and even a few tornadoes.”