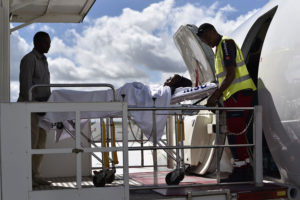 One of the Tanzanian children arriving.

The three Tanzanian children who survived the crash of a school bus in their country have undergone their initial surgeries after being flown to Sioux City Tuesday.

Members of the surgical team provided an update on the children’s progress Tuesday. Orthopedic surgeon Steve Meyer says the two girls brought to Mercy had very serious fractures, including one with a broken bone in her neck.

“That could have been very, very serious had she had surgery back in Tanzania and it went unrecognized,” Doctor Meyer says. “The young lady that we operated on last night, the extent of her spine fracture…was much, much more severe than we had anticipated. We have a big hurdle to cross with her.” Doctor Larry Volz says the children are bringing smiles to the medical staff who are caring for them.

He says he was asking questions to get information about the anesthesiologist about one young girl who has a broken jaw and could barely move. Volzs says the girl spoke up and said she speaks and writes very good English and could answer his questions. The mothers of the surviving children have accompanied them to America and thanked the hospital staff and other organizations who brought their children to Sioux city to be cared for.

All of their services and medical needs are being donated. The three children are the only survivors out of the 36 who were on the bus when it crashed May 6th.