You are here: Home / Fires/Accidents/Disasters / One person dead in train accident in Sioux City 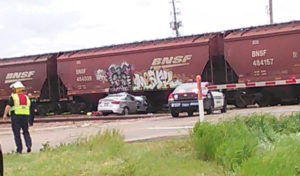 One person died after his car hit this parked train in Sioux City.

The Sioux City Police Department is investigating after one person died in a crash between a car and a train on the north side of Sioux City Thursday. Lieutenant Mark Kirkpatrick was at the accident scene.

“At this point in time we believe the train was stationary — it was not a moving train. And we are still investigating how and why the accident actually happened,” Kirkpatrick said. Kirkpatrick said the man who was driving the car was found dead inside after it struck the train.

“Our preliminary indication is that it was traveling at a higher rate of speed. Apparently it did go around the stop arm, because the stop arm is still intact. The dead man’s name has not been released. The accident happened around 9 a.m. Thursday.