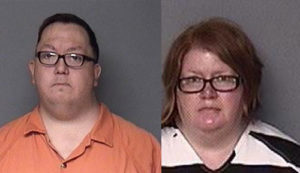 The Police chief in Perry says the parents of a 16-year-old girl found dead last Friday are each facing multiple counts of child endangerment.

Chief Eric Vaughn says they found Sabrina Ray dead at her home after getting a 911 call about an unresponsive person. “Although final autopsy results are not expected for a few weeks pending further laboratory testing — severe malnutrition was noticed by the medical examiner. At the time of her death, Sabrina’s weight was 56 pounds,” Vaughn says.

He says four of the charges are related to Sabrina’s death and the others are related to two young girls who were removed from the home on the day they found Sabrina dead. Those two children are 12 and 10 years old. Both are being held on a one million dollar bond. A third child was also removed from the home and Vaughn was asked if there may be additional charges in connection with the treatment of previous foster children the Rays took care of.

He says the case is still under investigation and he can’t comment on any pending or future charges. Vaughn also could not say what condition the other two children are in.”I really can’t comment on their conditions at this time, other than they are being treated by a physician,” Vaughn says.

The Rays operated a daycare center and had adopted the children. DCI Special Agent Mitch Mortvedt says they are working with the Department of Human Services, but he says they can’t say much about the other investigations associated with Sabrina’s death.

Sabrina’s death is the second of a teen girl in a home which had been flagged over child welfare concerns, and the state says it is hiring “an outside expert” to examine how the Iowa Department of Human Services handles such cases. An adopted 16-year-old starved to death in her West Des Moines home last fall, even though neighbors and school officials had reported the girl was malnourished.