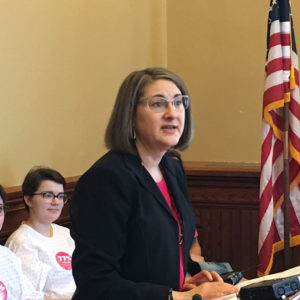 Planned Parenthood of the Heartland is closing four of its clinics in Iowa because of a new state policy approved by the Republican-led legislature and Governor Branstad.

June 30 is the closing date for Planned Parenthood clinics in Burlington, Keokuk and Sioux City. Another clinic in Bettendorf will close “in a matter of months.” After June 30, organizations that provide abortions will no longer be reimbursed for family planning services provided to Medicaid patients.

About 30 staffers who’ve worked in the four clinics will be laid off.

“As heartbreaking as this is for our affiliate, our staff, supporters and our donors, the more important number here is 14,676,” she said. “That’s the number of patients these four health centers have served over the last three years.”

Tax dollars have not been spent on abortions for years, even on medically-necessary abortions for indigent patients. Backers of the move to completely “defund” Planned Parenthood say tax dollars should not go to any facility where abortions are performed. De Baca called the new policy an “extremist” attack that will harm “an untold number of Iowans.”

“We dotted every ‘i’, we crossed every ‘t’ and exhausted every possibility. It is devastating to now be forced to turn away patients in these communities,” de Baca said during a conference call with Iowa reporters. “…For far too many of these vulnerable, low income and rural Iowan patients, there now may be nowhere to turn for the health care they deserve, certainly not to get the same compassionate, nonjudgmental care that they received at Planned Parenthood.”

Planned Parenthood will continue to operate eight clinics in Iowa. They’re located in Ames, Cedar Falls, Cedar Rapids, Council Bluffs, Iowa City and in the Des Moines metro. Groups that have pushed for the new policy say Medicaid patients who’ve been going to Planned Parenthood will be able to get prescriptions for contraceptives and reproductive health exams at other facilities in or near their communities.

Jenifer Bowen of Iowa Right to Life, a spokeswoman for a coalition of groups that lobbied for the new policy, issued a written statement this afternoon.

“The reallocation of our tax dollars, away from the abortion industry, and into the hands of true health care facilities will only empower more Iowa women,” Bowen said.