You are here: Home / News / The Branstad record on business, property and gas taxes 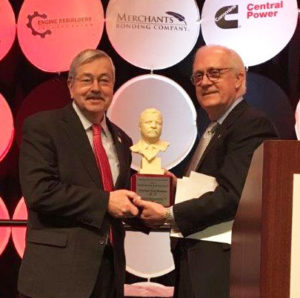 Terry Branstad’s tenure as governor appears to be nearing its end and his impact on state tax policy is assessed differently by his supporters and critics.

Two years ago, Branstad’s administration acted on its own to exempt manufacturing “inputs” like lubricants, drill bits and bolts from state sales taxes. About three decades ago, Branstad successfully pushed legislators to erase sales taxes on the machinery and equipment purchased for the factory floor.

“Good tax policy says you want to tax things at their highest value,” Ralston said during an interview with Radio Iowa, “and you don’t tax them on the inputs like machinery and equipment, because that means they’re doubled taxed.”

Four years ago, Branstad approved what he touted as the largest tax cut in state history, estimated to save commercial property owners $4 billion over the following decade.

Critics say the state tax system is way too complicated with dozens of tax credits and Branstad’s been too eager to approve specific tax breaks for big businesses. Senator Joe Bolkcom, a Democrat from Iowa City, has argued the state budget is busted because out-of-state corporations are getting handsome tax breaks.

“Our priorities are messed up here,” Bolkcom said during a recent senate debate. “We are putting the interests of these very large special interests in this tax code that is rigged.”

Branstad has approved three separate gas tax increases during his tenure as governor. According to Associated General Contractors of Iowa vice president Scott Newhard, those dollars have had a “significant impact” on the state’s roads and bridges.

“He came in here as a highway infrastructure advocate and he’s leaving here as one,” Newhard said.

The state gas tax went up a dime a gallon on March 1, 2015. Iowa’s tax on a gallon of gasoline is now 30.7 cents. That’s lower than the gas taxes in Illinois and Wisconsin, but higher than it is in the other surrounding states of Minnesota, South Dakota, Nebraska and Missouri.

Back in 2015, several Republican legislators were critical of Branstad’s move to raise the state’s gas tax. They argued additional money for transportation projects could be found by cutting the state budget elsewhere.