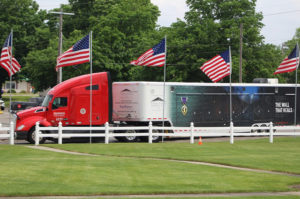 The replica of the Vietnam Veterans memorial was supposed to be set up in northeast Iowa Wednesday by was delayed by the threat severe weather.

Some 40 motorcycle riding veterans met the semi carrying the wall in Ellsworth and escorted it the rest of the way into Cedar Falls. AMVETS Post 49 in hosting the wall, and Second Vice Commander Wayne Heiselman says it is a good thing to bring to the community.

“I think it means a lot to veterans, the Vietnam veterans especially of the Cedar Valley area,” Heiselman says. The assembly of the wall was delayed until this morning out of concern about possible severe weather in the area. Heiselman says they plan to have it up for the opening ceremonies at 1:30 p.m. He says the setup of the wall, tents and education center will take around five to six hours. 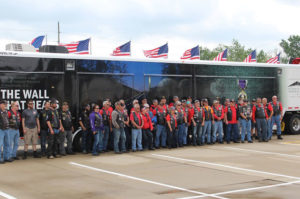 The escort team for the wall.

Victoria Thomas is the site manager for the wall while it is in Cedar Falls. It’s a half scale replica that is half as tall and half as long as the wall in Washington, D.C.

There’s also a mobile education center. “And that’s going to have some LED screens that are going to cycle through some photos. Some of which are going to be some of the local heroes who on the wall that are from this area. As well as some exhibits of some of the things that were left behind at the wall in Washington,” Thomas explains.

She says it’s called “The Wall That Heals” for a good reason. “There’s a lot of folks out there –especially as you get further west and further from Washington — who just can’t make it to the wall. So, it’s a good education tool and a good healing tool for them to come our and learn about it. They might not ever get the chance to go to Washington ,” according to Thomas. “And there’s also lots of school groups, especially younger kids who can’t always do that field trip to Washington and its a good way for them to come and learn about the Vietnam War and also about memorials in general.”

The wall will be in Cedar Falls through Sunday, with closing ceremonies at 3:30 p.m.