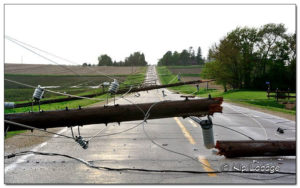 Poles knocked down by the wind in Bremer County near Janesville.

A severe storm left electric poles toppled like dominoes Wednesday along a county road just east of the northeast Iowa town of Janesville.

Bremer County Emergency Management coordinator, Kip Ladage was in the midst of it and says it didn’t appear to be a tornado. “I believe that was straight line winds — I happened to be there when it happened — one of the scariest things I’ve ever experienced,” Ladage says. “I actually though my truck was going to get rolled over, the wind was so strong. I sensed no rotation.”

Ladage took photos of the poles stretched across Highway C-50, but he didn’t count them all. “The number of poles is however many poles cover almost 2 miles of highway…every pole was down, nothing was spared in almost a 2-mile stretch,” Ladage says.

Residents of Janesville were without power for several hours. Those who live along the road also lost power when the poles went down, and Ladage says he heard generators running as he drove through he area today surveying the damage. 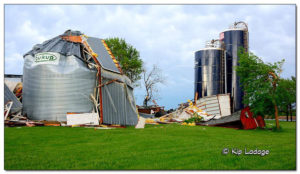 An unused hog confinement shed blew into this grain bin in Bremer County.

Other parts of the county saw damage that Ladage says included a few structures, but was mostly downed trees.

“Outside of Tripoli just south of town, a retired hog confinement building was picked up and thrown into a bin full of corn. If that bin hadn’t been full of corn, there’s a high probability it would have taken that bin out as well,” he says. “There were several places I’ve seen where trees had fallen on cars. In Tripoli a tree dropped on a van. A lady was carrying five students from the school and the tree dropped right on the van while they were going down the road. Fortunately there were only a few scratches out of that incident.”

Ladage says those minor injuries were the only ones he knows of following the storm. “I am not aware of any other injuries from this– which is very fortunate — it could have been disaster,” according to Ladage. Bremer County was one of several which saw severe weather Wednesday as storms included straight-line winds, tornadoes, hail and rain.

Here’s a video Ladage took of the damage: