You are here: Home / News / Actor who played famed TV vampire takes bite out of Iowa 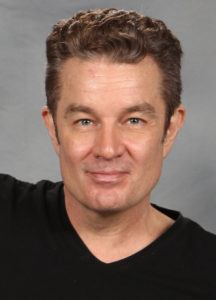 An actor who starred on TV’s “Buffy The Vampire Slayer” is in central Iowa this weekend to appear at the Wizard World Comic Con in Des Moines.

James Marsters played a vampire villian named Spike who was originally going to be staked into dust after a few episodes of “Buffy,” but quickly developed such a fan following that he became a series regular.

Marsters says Spike was popular because he always had fun. “There’s a saying that we have in stage that says, ‘It’s called the play for a reason. No one pays to watch you work,'” Marsters says. “The trick is to always, no matter what kind of role, on some level have a lot of fun. The weird thing about Spike was that he was having a lot of fun dismembering people.”

While Marsters was born and raised on America’s West Coast, the character Spike was from England, so he had to be proficient with the accent. As he visits Comic Cons across the country, Marsters still encounters people who -don’t- know he’s -not- a Brit.

“I constantly meet people who feel betrayed that I’m not British,” Marsters says. “I like to play it off when I say, (in accent) ‘I’m only British if you pay me. Oh, that’s right, you paid me for an autograph. Yes, I’m British. I’m from London. Have been all my life.’ (Back to his true accent) But I’m sorry, man, fooled you! I’m from California. I just watched a lot of ‘Monty Python’ when I was a kid.”

In addition to being a key player in the “Buffyverse,” Marsters has enjoyed roles in many other top-flight sci-fi franchises, including Star Wars, Doctor Who, Battlestar Galactica, Spiderman and Superman.

His latest project also revolves around a fantasy universe of superheroes and ubervillans. “I’ve been cast in a new television series for Hulu,” Marsters says. “It’s based on a Marvel comic book and it’s produced by Marvel, called ‘Runaways’ and that’s going to keep me busy for the forseeable future.” “Runaways” is scheduled to debut in 2018. It’s about a group of teens who discover their parents are super-villains in disguise. After that series runs its course, Marsters says, he’ll take what comes.

“I find that the roles that come to me are much more interesting than the ones I might dream up for myself,” Marsters says. He says his first role on stage was playing Eeyore in a 4th grade production of “Winnie The Pooh” and he’s been hooked on acting ever since.

Marsters will be joined at Comic Con by another “Buffy” veteran, actress Emma Caulfield who played Anya on the hit Fox show which ran seven seasons, from 1997 to 2003.