You are here: Home / Crime / Courts / Branstad says ‘tragedy’ of teens’ starvation deaths will be reviewed 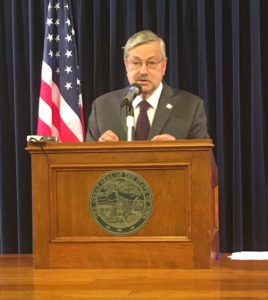 Governor Terry Branstad today said the parents accused of mistreating two Iowa teenagers who’ve recently starved to death will be held accountable by the justice system and the governor said staff in the Department of Human Services who did child welfare checks in both homes are trying to do the best they can.

“We have to review what went wrong and how we can do a better job to prevent these kind of things from happening in the future,” Branstad told reporters.

An outside consultant is being hired to review the state’s child welfare system. Natalie Finn of West Des Moines starved to death last fall, despite reports from neighbors and school officials who raised concerns about her home environment. Sabrina Ray of Perry, who also was 16, died last week and the medical examiner said she was severely malnourished. Child abuse investigators had visited her home as well.

“It just breaks my heart to see this happening in our state and I want to do all I can to try to prevent it from happening again,” Branstad said.

A few Democrats in the legislature have called for the resignation of Iowa Department of Human Services director Chuck Palmer after this second case of an adopted teenager dying of starvation. Branstad said Palmer’s running the biggest agency in state government and it deals “tens of thousands” of child welfare cases.

“It’s such a terrible tragedy when you have a teenage child that starves to death or is mistreated,” Branstad said. “But I also want you to know that Chuck Palmer is a very dedicated public servant who has worked hard to deal with a lot of important issues, everthing from the redesign of our mental health system to Medicaid, to protecting children.”

According to Branstad, Palmer has “done a lot of good”and the agency has prevented tragedies.

“But we are very, very disappointed and upset that we have lost these young children and we obviously want to make sure we do everything we can to make sure this doesn’t happen again,” Branstad told reporters this afternoon.

The Republican chairmen of the Government Oversight Committees in the House and Senate released a statement about their own investigation of the state agency. The GOP legislators say the starvation death of a second child who was “on the Department of Human Services’ radar…confirms the need” for an examination of the state’s foster care system and how child abuse reports are handled.