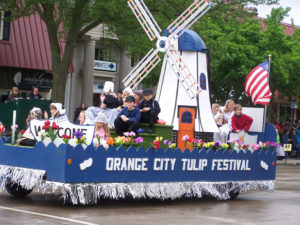 The executive director with the Orange City Chamber of Commerce, Mike Hofman, says they’ve had good crowds the first two days despite some rain. He says festival organizers are hoping for sunnier weather, but are ready to handle anything.

He says they have a lot of indoor events, including a quilt show, flower show, Shrek the Musical. “And we do if we have to cancel the afternoon parade –we do a rain show its called — so a lot of the activities that happen during the parade happen in city hall to. So, you can come down and enjoy that,” according to Hofman. Hofman says the Orange City event brings people to the Sioux County community from the midwest and around the world.

“We’ve had visitors from China, South Korea, Japan, Argentina, Brazil — all over the world really — and the 50 United States,” Hofman says. He says they keep a globe that shows where the varioius visitors come from. The festival runs through Saturday and you can find our more at: www.octulipfestival.com