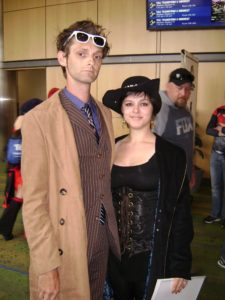 Nowhere else would you expect to see Batman posing with Harry Potter, a T-rex and an incredible She-Hulk.

Many of the thousands of people streaming into Wizard World Comic Con in Des Moines this weekend are in costume.

A common theme is acceptance. Most say this is a place where you can be anything you dream of without being questioned.

Ian Westercamp of Oskaloosa is clad in a long brown coat, a brown pinstriped suit, sunglasses and wild hair. Westercamp says, “I am wearing David Tennant’s costume, the 10th doctor from ‘Doctor Who,’ arguably the fan favorite amongst, well, everybody!” 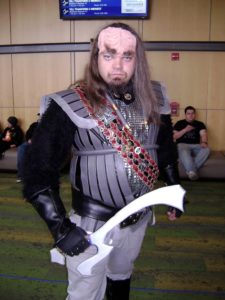 While Westercamp found his tie at Goodwill, most of the rest of his costume was purchased online. However, Des Moines resident Ron Puck is decked head to toe in the guise of a futuristic alien space warrior, a costume he proudly proclaims he made himself. “I’m dressed as a Klingon from ‘Star Trek/The Next Generation’ era,” Puck says. “I bought myself a sewing machine and taught myself how to sew and got some vinyl and looked online and figured out how to make a Klingon outfit.”

The people-watching at Comic Con makes the event worth the price of admission. Comic book villians, superheroes from the big screen, television vampires and other vicious or beguiling creatures that are completely the product of the wearers’ imagination stroll the aisles of merchandise. They’re also lined up to get autographs from celebrities like comic book icon Stan Lee, actor John Cusack or WWE wrestling star Alexa Bliss. 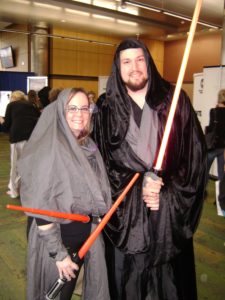 Julianna Roberts, a nurse from Ames, loves the Star Wars franchise and is a robed Sith lord, complete with a pair of red lightsabers. Roberts says Comic Con provides unfettered freedom of expression.

“It lets you wear whatever you want to wear and not have to worry about anyone else judging you,” Roberts says. “You’ve got to just be creative. It’s fun!”

A web designer by day, Christa Dickson of Des Moines is arm in arm with a girlfriend, depicting characters from “Sandman,” a comic book series that gained popularity in the 1980s. 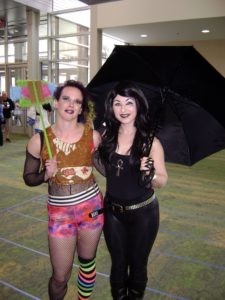 “We play two sisters, she’s Death and I am Delirium,” Dickson says. “It’s basically exactly what it sounds like. We’re the personifications of those two aspects of reality.” Dickson’s homemade outfit is a conglomeration of pinks, purples, browns and black fishnet, while her pal Amanda Marie Corey, of Des Moines, is donning all black including black glitter lipstick.

“I am Death and her character is quite bubbly, actually, for Death,” Corey says. “So I have a long black wig on, an ankh on a black shirt with pleather pants, a Hot Topic belt and an umbrella to shade me from the sun.”

One of the day’s more detailed costumes isn’t from a fantasy world but our own distant history. Wyatt Grubb of Granger learned to cut and craft metal and leather to create his alternate persona. 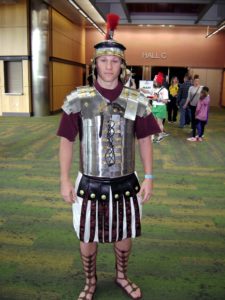 Grubb says. “I decided that I would start making some different pieces and buying different things and just decided to make this awesome costume.” Grubb’s goal for the day was to find an appropriate sword to complete the look, and along the way, to pose for photos with a princess, a ninja and a pointy-eared Vulcan.

Comic Con runs through Sunday at the Iowa Events Center.