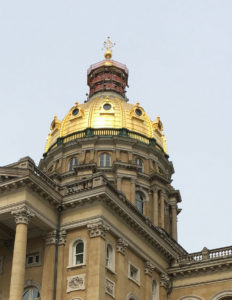 An influential figure in Iowa politics for more than four decades has died.

Former House Speaker Don Avenson of Oelwein, an unsuccessful candidate for governor in 1990 and a statehouse lobbyist ever since, died of a heart attack on Friday. He was 72.

Avenson was first elected to the Iowa House in 1972. A couple of years later his Democratic colleagues elected Avenson to be a floor leader. Avenson ultimately served eight years as House Speaker, the legislature’s most powerful post. No other speaker has had a longer tenure. Jerry Fitzgerald and Avenson struck up a friendship shortly after the two were elected to the House nearly 45 years ago.

“Very much a family man and just a decent guy,” Fitzgerald said of Avenson during an interview this afternoon. “Wanted to do good…wanted to leave the world a little better place.”

Fitzgerald was with Avenson when he died. The two had been vacationing. They were driving through Nebraska when Avenson suffered a heart attack.

Avenson was the Democratic Party’s nominee for governor in 1990. Republican Governor Terry Branstad, who won that race, issued a written statement today, calling Avenson a “strong and effective legislator…who cared deeply about…the people of Iowa.” Avenson was the legislature’s top leader during Branstad’s first two terms as governor and Branstad said even though he and Avenson “sometimes disagreed on politices,” Branstad said he knew he could “always rely on Avenson’s word.”

Branstad said “together,” he and Avenson were “able to accomplish many things.”

Avenson steered the Groundwater Protection Act through the legislature in 1987 as well as a bill that dramatically reorganized the executive branch of state government. Fitzgerald said Avenson was “a towering figure” with shrewd deal-making skills.

“Everybody got something that they thought was worthwhile,” Fitzgerald told Radio Iowa. “…People, when they get into politics — regardless of what they believe and what part of the political spectrum they are they come to realize what the institution is about: try to find solutions (and solve problems.”

Avenson was an avid outdoorsman and a voracious reader of non-fiction. Acquiring books was part of their annual vacation together, according to Fitzgerald.

“We’d buy books, but he bought a lot more than I did,” Fitzgerald said.

Several years ago, Avenson tracked down every book about the Lewis and Clark Expedition that was still available in print and he read each one.

Avenson is the father of three adult children as well as grandchildren. He and his wife Diane were married in 1964 and have made their home in Oelwein. He joined the family business after graduating from college and became president of Oelwein Tool and Die Company in 1984. Funeral arrangements are pending.