You are here: Home / News / Woodworkers gather in Des Moines for annual conference 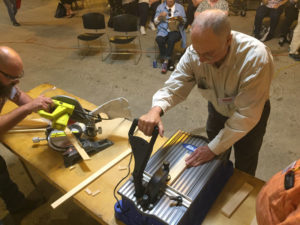 A couple hundred woodworkers from around the country are in Des Moines for an annual conference. Dave Campbell is the editorial content chief of “WOOD” magazine, which is hosting the event know as “Weekend with Wood.”

He says the conference participants will learn all kinds of woodworking techniques from experts and the editors of the magazine. “It can be anything from learning how to hand-cut dovetails, to tuning up their table saws, to learning how to spray a finish on their projects. It’s all the kinds of techniques that they can take back into their own shops and apply to the projects that they build,” Campbell says.

He says woodworking is gaining some new interest from what’s called the “maker movement,” or people who take items and transform them into something else. “Woodworking tends to be a little bit of an empty nester hobby due to sometimes the cost of equipment can be rather high — traditionally it’s been that way,” Campbell explains. “What we are starting to see thanks to the maker movement, people are sort of backing into woodworking from the maker’s side.”

Campbell says its a new approach to the traditional entry into woodworking. “When I was growing up, you learned woodworking at your daddy’s knee and you learned woodworking because it was sort of a natural extension of your home improvement skills and the things you did to make your home nice,” according to Campbell. “I think there’s a little bit of that now –especially with the popularity of the flipping shows on television and the home improvement shows on cable — and we are getting some of the people who now have these tools from doing those projects and it’s what can I do next now that I have the house done. And it’s now that I have the house done, maybe I should build some furniture for that house.”

Campbell says millenials also have taken more of an interest in woodworking. “They really do like doing things themselves, whether it’s gardening or repurposing an old TV set that’s been put at the curb, the old wooden console TV. The pallets are another popular thing that people are making things out of these days,” Campbell says. Many young people would get their first introduction to woodworking in shop class in high school, but Campbell says that has changed.

“Over the past 20 years or so there’s been a decline in that as some of the school districts have pushed for more of the reading, writing and arithmetic skills and the funds have gone into that,” Campbell says. “There’s also of course, insurance rates that go into insuring schools that are putting fingers into the way of table saw blades and things like that.” Campbell says the emergence of the maker movement and the desire for people to build their own things has help with a bit of a resurgence of shop classes in high school.

WOOD Magazine is published by Meredith Corporation, which is headquartered in Des Moines. The event runs through Monday.