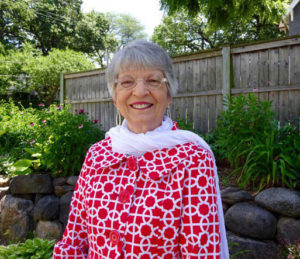 Corning was in her sixth year as a state senator when Terry Branstad picked Corning as his lieutenant governor running mate in 1990. Corning served eight years in the post.

“She, I think, was the epitome of civility,” said Mary Ellen Miller, executive director of “50-50 in 2020”, an organization that encourages women to run for office in Iowa. Corning was one of the group’s founding board members.

Governor Branstad issued a written statement Sunday, calling Corning “an outstanding, unflappable leader who treated everyone with the respect and dignity they deserved.”

Miller said Corning was a mentor to many women considering a run for public office.

“She would always have time, not just Republicans but Democrats as well, to share her experience and offer advice,” Miller told Radio Iowa. “She was very open about encouraging women to run and helping them as best she could.”

This past March, in spite of failing health, Corning attended a “50-50 in 2020” training program for would-be candidates.

“The smile is classic. We always talked about the Joy Smile. She was aptly named, I guess,” Miller said. “Not that she didn’t have her serious side, of course.”

Corning ran for governor in 1998, but dropped out of the race before the GOP Primary. In the 18 years since she left elected office, Corning helped raise money for a chapel at the state prison for women. She was a Republican moderate who favored abortion rights and, in 2010, she co-founded the group “Justice, Not Politics” to counter the campaign to unseat Iowa Supreme Court justices who had legalized same-sex marriage.

Corning was born in Creston and was a 1949 graduate of Bridgewater High School. She earned an education degree from what was then known as the Iowa State Teachers College. She served nine years on the Cedar Falls School Board before being elected to the Iowa Senate.

She died Saturday with her three daughters by her side. Corning wrote her own obituary, thanking all who had contributed to and enriched her life. And she suggested those who wish to make a memorial contribution in her honor write checks to either Planned Parenthood, the Des Moines Symphony, her church or the University of Northern Iowa.

Corning’s funeral is scheduled for Thursday in Des Moines.