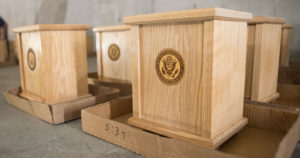 Woodworkers from around the country attending a conference in central Iowa this weekend worked on a special project to create wooden urns for the Iowa Veterans Cemetery.

Dave Campbell, the editorial content chief of “Wood” magazine, which hosted the conference. He says they try to do a special project every year.

“Last year we built 29 little free libraries to promote literacy in central Iowa and then we had those scattered around central Iowa that were built by our attendees,” Campbell says. Campbell says this year’s project meets another need. 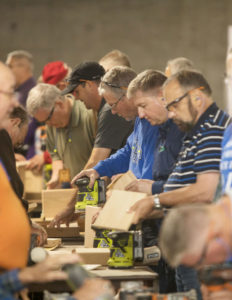 “There are a large number of indigent veterans that if their cremains go unclaimed, they are turned over to the Veterans Cemetery and often times they are interred in just a plastic box,” Campbell says. “We didn’t really feel that was a very respectful or dignified burial for someone who has served our country.” 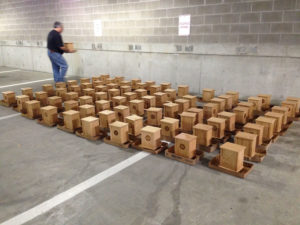 They got things underway Saturday with the goal to make enough urns to handle the need for one year. “The Veterans Cemetery says they can use about a hundred of these in about a year’s worth of time,” Campbell says. He says it takes about 30 to 45 minutes to build an urn and they planned to run right assembly lines to machine, cut, rout, sand and assemble the finished products.

“Each box will have a lazer-engraved medallion of the branch of service that the veteran served in,” Campbell says. The special project was part of the activities at the three-day conference, where the woodworkers learned new techniques from experts.

Liberty Hardwoods, Incorporated in Des Moines donated the red oak lumber to construct the urns, and RIDGID and RYOBI provided the power tools needed to build them.