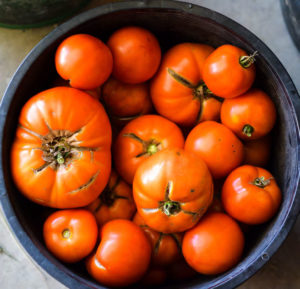 A survey finds tomatoes are the top horticulture crop grown in the state for resale.

The Iowa State University Extension Department has released the results of its first horticulture survey since 2000.

Arlene Enderton with the extension Outreach Local Foods Program, says the survey includes crops that can be eaten that are grown to sell to others.

“It would include sweet corn, any fruits or vegetables, also it included nuts. And it included pumpkins, even though people don’t usually eat them, you could eat them. We also included honey and maple syrup — which are not horticultural products — but they are specialty crops,” according to Enderton.

“We found that the vast majority of them had been growing horticultural crops for less than ten years. So according to the U.S.D.A. that would make them beginning farmers, assuming they hadn’t been growing other types of things prior to growing horticulture type crops,” Enderton says. “The median farm size was two acres, which means that half of them are farming on less than two acres and half of them are growing on more than two acres. The largest was eight acres.” She says grower retirements appear to have impacted the industry.

“The average acreage per farmer went down, so we are getting the impression that our farms are smaller today and it appears that some of our larger horticultural farmers may have retired or gone out of business since 2000. We saw a lot fewer of the really large farms — which would be farms that had 20 acres or more,” Enderton says. She says while farmers are retiring, there appears to be many people stepping in to take over.

“One thing that I thought was really encouraging is there is a lot of new farmers. There’s a lot of interest in growing horticultural crops, “Enderton says. “I think that’s a really good thing. I think there’s a potential for a lot of growth. About half the growers market their products exclusively through direct-to-consumer markets including farmers markets, farm stands, community supported agriculture, you-pick, and online sales.

You can see the full survey on the Iowa Department of Agriculture’s website under the “Hot Topics” section.