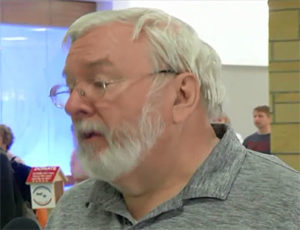 A group of 85 veterans left from Cedar Rapids early this morning on an Honor Flight to Washington, D.C. George Rickey of the Eastern Iowa Honor Flights talked with KCRG TV about what is in store for the veterans.

Rickey says it’s important to honor these veterans. “Because man of them came home from their service, they dropped their bags, they went back to school, went back to the farm. Nobody ever thanked them for the sacrifice that they made,” he explains. “This is long overdue, but it is our effort to say thank you.”

Rickey says this will be the first trip to Washington for many of them.

“We get that a lot. We’ve had veterans who have never been out of Iowa that have gone on a flight. So yes, it is a common occurrence,” Rickey says. It’s a full day for the veterans as the flight returns to Cedar Rapids just after 10 o’clock tonight.