You are here: Home / Agriculture / Off and on rain makes planting an experiment 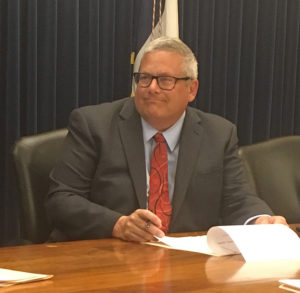 Iowa Agriculture Secretary Bill Northey says farmers have been able to catch up quite a bit in their planting with some days of dry weather.

But he says some of the corn that’s already emerged may have been in too much water to make it. “They’ll be a little bit of replant where some water has been standing. Most of the rest of the crop it sounds like is up and going,” Northey says. “There’s still some beans to be planted yet….and it is wet enough across Iowa it’s going to take a little while in some places to be able to get back in the field.”

It’s preferred to get the corn all planted by mid-May to avoid any loss in yield. While 92 percent of the corn was planted by the start of this week, Northey says there’s still plenty to be concerned about.

“Even just eight percent of the corn means we have a million acres of corn yet to plant — and that’s not in here by the end of May — so we’ll see,” Northey says. “That starts to lose a little yield. Certainly some replants in some bottoms that’ll need to happen, that’ll probably be a little lower yield expectations for producers as well.”

Northey says farmers were busy at the various times when the weather was dry. He says there was one in April, one in early May and then the middle of May, so the planting times have been spread out and it is kind of an experiment in different planting times. Northey says he’s gotten all his corn planted, but like other farmers, he needs some heat to get it growing.

“We do need some warm weather to get it up and going. Most of it has emerged across the state, but it’s still coming yet,” Northey says. He farms near Spirit Lake and says he still has some beans to get planted.