You are here: Home / News / Soon-to-be Governor Reynolds reflects on her past, the mission ahead 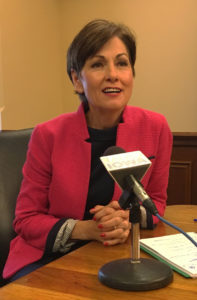 The woman who will become Iowa’s next governor later this morning credits her “small town roots” with propelling her to this point in her political career.

Republican Kim Reynolds will take the oath of office at about 10:30 this morning, shortly after Governor Terry Branstad resigns and is sworn in by a federal judge as the next U.S. Ambassador to China. Reynolds is well aware that as Iowa’s first female governor, she’s breaking barriers.

“Young girls just come up already and they’re so excited,” Reynolds told Radio Iowa yesterday afternoon, her voice cracking with emotion. “You have to see it sometimes to believe in it.”

Reynolds, who is 57, said there were very few role models on the state stage when she became Osceola County Treasurer about 17 years ago. She credited former State Representative Teresa Garman of Ames for being one of the women who showed her the ropes once she got to the statehouse in 2009.

“She stuck to her guns and believed in what she believed in and she took a seat at the table and she took charge and that was really impressive to me to see that,” Reynolds said. “I liked her style.”

Former Lieutenant Governor Joy Corning, who died this past weekend, was another mentor.

“She was adamant about encouraging women to run for office and to seek leadership positions,” Reynolds said, “and would really challenge me to step out there and even take on more.”

Reynolds is a native of St. Charles. She and her husband Kevin raised their three daughters in Osceola. Reynolds said living in a small town prepared her well for the tasks ahead.

“You can be a part of everything, so you’d get to get your feet wet and get out there. It’s time management. It’s teamwork. It’s collaboration,” Reynolds said. “…But I grew up in county government. I wanted to have a seat at the table. I want to be driving ideas and initiatives that would impact my county.”

Branstad described Reynolds as a “policy wonk” yesterday and Reynolds acknowledged she wants to know how things work, but Reynolds said she’s learned over the past six or so years as lieutenant governor that leaders delegate and trust others to follow through. Reynolds, though, intends to be the chief cheerleader for her priority issues.

“If I believe in something, get out of my way because I believe in it from my very soul,” Reynolds said. “…As a leader, then, you want to encourage other people to follow and to feel that same passion for those ideas.”

Look for one of her priority issues to be getting legislators to agree to provide a long-term funding stream for water quality projects, something left over from Branstad’s to-do list. Earlier this year, Reynolds began describing income tax reform as the “next step” to making Iowa more competitive with its neighbors. Reynolds is planning a listening tour of the state this summer along with meetings with legislators and interest groups.

Reynolds recently met individually with the head of every state agency, soliciting ideas for streamlining state government operations, too.

“One of the first things I would like to do, too, is to do a retreat so we can all get together and just brainstorm and talk about innovative ideas and ways we can collaborate and better serve Iowans,” Reynolds said.

Reynolds will be serving the remaining 19 months on the gubernatorial term Terry Branstad won in 2014. She’s already raised more than a million dollars for her own reelection campaign in 2018.

A handful of Democrats have already expressed interest in challenging her bid for reelection. And yesterday “Progress Iowa” launched a website to catalogue their criticism of Reynolds on a variety of topics.