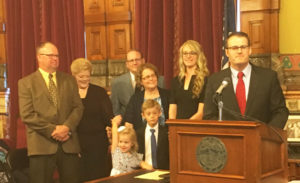 The man who Governor Kim Reynolds has named as her “governing partner” grew up in a small northwest Iowa town and credits former Governor Terry Branstad for igniting his interest in politics.

“I looked for someone that would be a full partner in my administration,” Reynolds said this morning during a news conference with Gregg in her formal office. “Someone who shared my vision, someone that I trust, I was compatible with, was a outside thinker and somebody that would work hard for the people of Iowa and I found those qualities in Adam Gregg.”

Gregg, who is 34 years old, grew up in Hawarden. After graduating from Central College in Pella, he got a law degree from Drake University. Former Governor Terry Branstad hired Gregg in 2012 to lobby legislators to pass his agenda. Gregg was a second grader when he first met Branstad and got Branstad’s autograph. 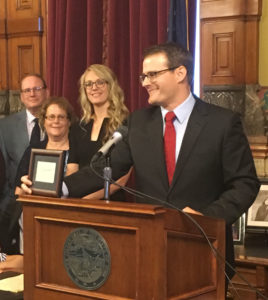 “I’ve hung onto this all these years…Believe it or not, I think it actually perfectly captures why we’re here today,” Gregg said, holding the framed autograph up for picture-takers in the room. “Governor Branstad couldn’t have known that small little act of kindness so many years ago might have just been a little nudge to that little kid to have an interest in public service.”

In 2014, Gregg was an unsuccessful candidate for Iowa Attorney General. Right after the election, Branstad appointed Gregg as the state public defender. Gregg said as “acting” lieutenant governor, he will “strive to earn the trust” of Iowans.

“I’m an ordinary, Iowa guy…but I have been truly blessed with extraordinary opportunities to serve,” Gregg said. “…At my core, I’m an advocate and a problem solver.” Gregg called his new boss Kim Reynolds an “inspiration” — especially to young girls like his own daughter. Gregg will draw the salary reserved for lieutenant governor — a little more than 103-thousand dollars a year.

Reynolds said Gregg will be her “top advisor,” but because of the attorney general’s ruling early this month, Gregg will be “acting” lieutenant governor and will not be first in the line of succession if Reynolds leaves office early. If Reynolds exits before January of 2019, Senate President Jack Whitver would become governor.