You are here: Home / Military / Veterans remembered at the Iowa Gold Star Museum 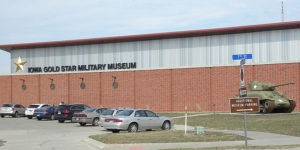 More than 2,000 people turned out, some in military uniforms, to tour the museum.

Iowa National Guard spokesman Colonel Greg Hapgood says they also got a free breakfast. “It’s what people would say is SOS, or stuff on a shingle, sausage gravy or chipped beef gravy on toast, is a pretty typical military breakfast,” Hapgood says.

Governor Kim Reynolds showed up at 7 A.M. to greet veterans and their families: “I try to never walk past a veteran — especially if I see them in uniform to walk up and say thank you — and they almost act uncomfortable when I do that. But there are so few who serve on behalf of all of us,” Reynolds says.

Hapgood says this year’s observance has special meaning because of the 100th anniversary of the U.S. entry into World War One. Camp Dodge was one of 16 major training bases across the country that got soldiers ready to go overseas.