You are here: Home / Sports / New name and logo for Iowa D-League team 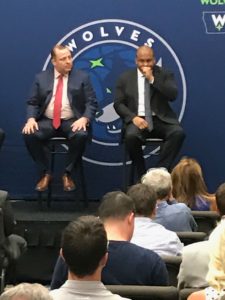 The Iowa Energy is now known as the Iowa Wolves. The Minnesota Timberwolves purchased The Des Moines franchise that is part of the NBA Development League and unveiled a new name and logo.

The Timberwolves had been placing players with a variety of D-League teams.

“But is isn’t something we could rely on into the future especially as more and more of these teams are owned by parent teams”, said Timberwolves owner Glen Taylor. “So when the opportunity came along for us to purchase this franchise we sort of jumped on it.”

Minnesota coach Tom Thibodeau had the Iowa Energy as a D-League affiliate when he was the coach of the Chicago Bulls.

“And the experience was very positive and very useful”, said Thibodeau. “What this will allow us to do is run our own system.”

The league itself is being rebranded and will be known as the NBA Gatorade League next season.